Why do Wolves Howl? 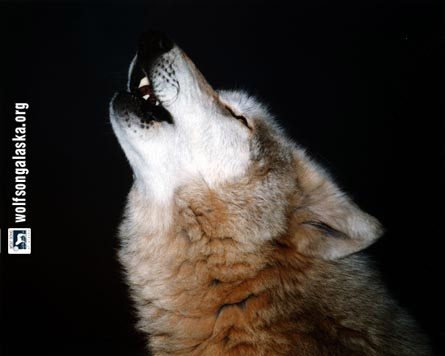 Howling is the type of vocal communication the wolf is most famous for (also in their vocal repertoire are whimpers, yips, growls, and barks). It’s no surprise that we are captivated by the sound of a howl, for as the mysterious song fills the vast expanses we are somehow reminded of, and are reconnected to, the wondrous aspects of nature that we may have forgotten about.

Once a wolf begins howling, other pack members often show a strong tendency to approach that animal and join in. Lois Crisler has said, “Like a community sing, a howl is a happy occasion. Wolves love to howl. When it is started, they instantly seek contact with one another, troop together, fur to fur. Some wolves will run from any distance, panting and bright-eyed, to join in, uttering, as they near, fervent little wows, jaws wide, hardly able to wait to sing.” 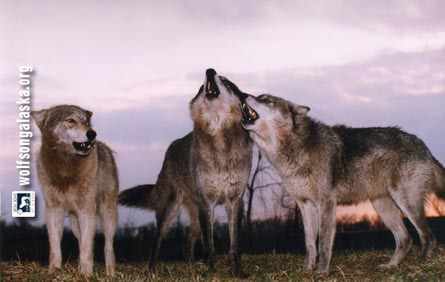 While the functions of howling are not fully understood, several different types of howling have been identified, each used under different circumstances. Once thing is certain, howling appears to be the glue that keeps the pack together and plays a role in the formation and/or the maintenance of strong bonds between other members of the pack. Some members, usually those who rank lowest in the pack hierarchy, however, may be discouraged, or “punished” for joining in a howling chorus.

One of the most often used howls is a call which reassembles the pack, such as after a chase, or if a wolf has gotten lost. This is a deep, loud, and guttural sound sometimes accompanied with a few barks. Howling seems to convey the location of individual wolves so they can reunite. As wolves range over vast areas to find food, they often become separated from one another. Because of its low pitch and long duration, howling is well-suited for transmission in forests and across tundra and can be carried several miles. If a wolf gets separated from the pack, howling soon begins. In one instance, it was observed that after a mother wolf became separated from her young on one side of a river, she howled to guide her pups to a safe spot to cross.

When wolves return from a hunt, those who stayed behind will rush to greet them and howling may break out as well. Additionally, wolves will sometimes howl after a chase to celebrate a successful hunt.

Before a hunt, a different kind of howl, the social howl, may serve to excite the pack members and bond them prior to setting out. This type of howl is one of sheer joy and is often heard as the pack gathers for a hunt. This social howl celebrates togetherness, pleasure, and friendship. Resting wolves will begin romping about with tails wagging while they sniff and press against each other. Then they will join in on the howl. Wolves will not, however, howl to initiate a chase and will be silent when actually hunting.

The social howl is also used as a warning to wolves in nearby territories. This howl, therefore, has much significance between packs, as well as within. Inter-pack howling may sometimes go on for hours promoting speculation that the howling may function in territorial advertisement or maintenance, and may be a threat or warning. Howling to warn other packs to stay away is most often heard during the mating season, as well as when the pack is at the den or resting sites. Wolves responding to unknown wolf howls are warning the intruder that they will hold their territory and defend their mates, pups, or food sources. However, lone wolves who intend to travel outside their home territory do so silently, because a meeting with wolves in another territory may lead to a confrontation, which sometimes proves fatal to the intruder.

Another type of howl occurs when a wolf is lonely. This is a rising and falling sound with a long slide at the end. This howl is heard mostly during the mating season when a wolf is looking for a possible mate and wolves tend to howl more frequently around the breeding season. A captive wolf might also howl due to a feeling of isolation.

Some researchers have noted that wolves sometimes appear to howl simply because they are happy (a happy howl can sound “mournful”). For example, it has been observed that when a mother wolf is giving birth to her pups inside the den, wolves on the outside start howling and become very excited, prancing about. Once the pups are born the excitement increases and howling gets even louder.

Howling appears to identify a particular wolf, much like a fingerprint does for primates. The many different qualities within a howl allow other wolves to know which wolf is doing the howling so they may identify each other and also those individuals who are not part of their pack. Several field researchers have even claimed the ability to distinguish specific wolves in a pack by their characteristic howls! Additionally, no two wolves will howl on the same note. There is harmony. If two wolves do start on the same note, one or both will change their beginning note. Why they do this is unclear, although some believe it makes the pack sound like a bigger group of animals and, therefore, more threatening to intruders.

There is some evidence that howling might also supply information about their behavior, such as whether the wolf is walking slowly, pacing, or lying down. If such details can be detected in howls, they only occur among associated wolves that have learned to relate each other's behavior to the specific changes in howling. This is only one example illustrating the importance of learning during the socialization process of these intelligent animals.

So, do wolves howl at the moon? It is safe to say that this thought is just a myth. Wolf howls have been inadvertently associated with the moon most likely because they are more active on brighter lit nights.

If you are one of the fortunate ones able to hear a wolf, or a pack of wolves, howl in your lifetime think about all the reasons why they might be howling and, as Mark D. Martinson has said, “ When you hear a wolf’s howl, listen to it to the full. Feel its primeval beauty, way deep in your soul.”