An Alaska wolf that disappeared about 12,000 years ago just made another appearance.

No one will ever see this wolf, but scientists have found that it was different from Alaska's wolves of today, and it was not like its Ice-Age contemporaries that lived in, among other places, Los Angeles. 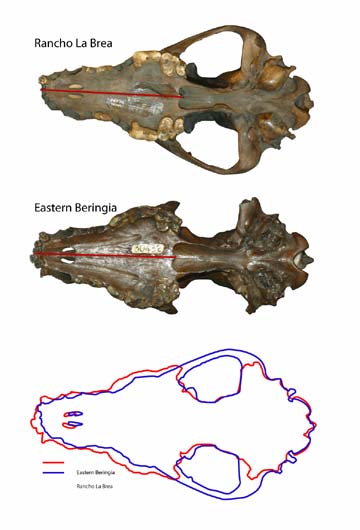 Pleistocene wolf skulls from Rancho La Brea (in present day L.A.), California (above) and Fairbanks (middle). Though the skulls are the same length, their shape is different-the wolf skull from Alaska is wider, suggesting those wolves had greater biting power.

Blaire Van Valkenburgh is a UCLA researcher who lives and studies very close to the La Brea Tar Pits in downtown Los Angeles. She and her colleagues compared DNA from wolves that perished in Interior Alaska during the last Ice Age with DNA from living wolves. The Alaska DNA samples came from bones and skulls exposed by Fairbanks miners as they tore away frozen soil to get at gold-bearing gravels beneath. Staff at the American Museum of Natural History came to Fairbanks from the 1920s to the 1940s to gather the bones and bring them back to the museum in New York.

The Alaska wolves surprised the researchers by being unlike the wolves running around Alaska right now. By looking at the DNA from wolf teeth attached to the skulls found in the permafrost (samples from teeth do the least damage to skulls), the scientists found the Alaska wolves had no relationship to modern wolves.

This means that Alaska wolves may have died off with woolly mammoths and saber-toothed cats at the end of the last Ice Age. Scientists had thought that wolves survived that grim period, but the wolves found in the permafrost near Fairbanks probably left no descendents according to the new study. Alaska's wolves of today are probably the relatives of wolves that rode out the last Ice Age south of the great ice sheets and trotted their way back north as the ice melted.

The recently discovered extinct Alaska wolf had a broader head and shorter nose than today's version, and from wolves that died in the La Brea Tar Pits. The Alaska wolf's jaws were wider too, suggesting it could make the most of its meals by popping femurs in half to get at the sweetness inside.

"Relatively deep jaws are characteristic of habitual bone crackers, such as spotted hyenas," wrote the scientists, including Van Valkenburgh and Jennifer Leonard of the University of Uppsala, in a recent article in Current Biology. The extinct Alaska wolves would be better equipped to both taking large prey and scavenging, the researchers wrote.

Paul Matheus, formerly of the Alaska Quaternary Center, once suggested that one of the largest meat-eaters in Ice-Age Alaska, the giant, short-faced bear that disappeared around the same time as the ancient wolf, might have been a full-time scavenger.

Van Valkenburgh thinks the ancient wolves killed some of their own meals and also scavenged carcasses on the grassland landscape.

"I don't think they would be straight scavengers," Van Valkenburgh said. "It isn't guaranteed you would find something dead to eat every day."

She said full-time scavenging makes sense only for creatures like vultures, which can ride thermals for long periods of time to look for food.

"For an animal that has to walk, it's not energetically efficient to be a scavenger," she said.

However the ancient Alaska wolf got its meals, it apparently couldn't get enough of them about 12,000 years ago. Then began a sad few thousand years when there were no wolf howls in the Alaska night.

This column is provided as a public service by the Geophysical Institute, University of Alaska Fairbanks, in cooperation with the UAF research community.
Ned Rozell[nrozell@gi.alaska.edu] is a science writer at the institute.

E-mail your news & photos to editor@sitnews.us