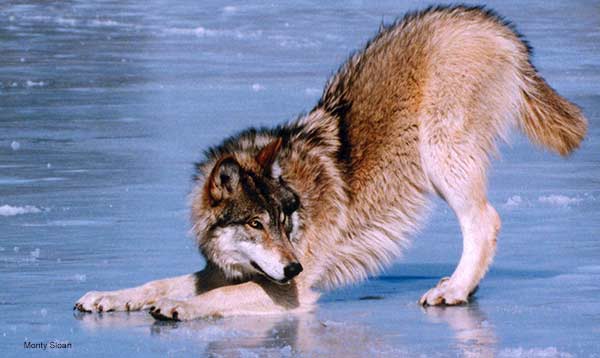 Canines, including wolves, foxes, coyotes, and - yes - Spot, have something special that enables them to live in the North: tough feet.

If you marvel at Spot's extended antics in the snow, you might also find the reasons behind his paws' apparent invincibility equally fascinating. For, though dog feet are made to withstand the elements, they're also surprisingly delicate. Sometimes, they even require a little owner upkeep. Wolves, direct ancestors to most dogs, are still champions when it comes to paw protection. After all, they don't spend most of their time curled up by the woostove.

Each of a wolf's toes is surrounded by stiff, bristly hairs that aid in both insulation and traction. Wolves also have special blood vessels that keep footpads just above the freezing point, preventing buildup of ice and snow.

At night, wolves curl up with their tails around their noses and feet, retaining warm air exhaled by the lungs and recycling it as a foot-warmer - a trait they have in common with foxes. Foxes have completely furred footpads, ostensibly to further reduce heat loss and improve traction.

Red foxes, found farther north than gray foxes, tend to have furrier feet. Domestic dogs, however, have very little hair on their feet. For the short periods most dogs spend outside on the coldest days of winter, they must rely on the adaptations they still retain from their ancestors - fatty pads and tough skin. Most of a dog's foot consists of pads made from fat and tissue that both shield the foot bones from shock and keep out the cold (including the carpal pad, that tough ball on the back of dogs' front legs - a couple inches up from the foot - that aids in stopping and gripping).

The skin over these fatty balls is the toughest on a dog's entire body. As one might expect, different breeds of dogs are adapted to different climatic conditions. For example, herding dogs originating in the snowy mountains of Europe are obviously adapted to colder conditions than dogs like the thin-coated mutt I adopted from Puerto Rico. However, all dogs need time to acclimate to cold in the fall; they need their coats to thicken while their footpads toughen. But no dog is able to withstand the coldest weather of the year. Uncomfortable cold can cause painful cracking of footpads, and your dog will let you know if he's at this stage if he shows signs like lifting his feet, whining, and stopping. Extreme cold can cause frostbite. When the dog's normal body temperature (101.5 degrees to 102.5 degrees) is lowered by cold, he will shiver to increase muscle activity. He also withdraws some of his circulation from his extremities to his internal organs.

But instead of completely cutting off blood supply to his extremities, which could cause death of his limbs, the dog has another neat adaptation up his dog-coat sleeve. Dogs have heat exchangers. Veins carrying cold blood back from a dog's feet to its heart run right next to arteries carrying warm, oxygenated blood to the feet. Thus, feet are supplied with oxygen and nutrients in cooler blood than the rest of the body uses, and the body is able to return lukewarm (rather than chilled) blood to the core. The feet can handle operating at lower temperatures because fat in the extremities is compositionally different from the rest of the body's fat: It has a higher melting point and a lower freezing point (thus, dogs are said to have "cold feet"). The same principle works in reverse in the hot summer months and keeps the body from overheating.

Despite all these adaptations, though, dogs can still get frostbite. Dog owners, after warming their pet's feet, should be on the lookout for pale and cold skin that looks red, swollen or blistered. If you see this, call your vet. If it's too cold for you, it's probably too cold for Spot. His feet can get frostbitten, and the salt used to de-ice roads and sidewalks can exacerbate the situation by causing pain, swelling and drying of the footpads. Dogs, unlike wolves, also can get ice balls between their toes, which cause pain and thus should be carefully thawed and removed.

A dog's pads should always feel smooth and even. To help your friend out, especially if he's a puppy, or geriatric, or from Puerto Rico, you might want to consider putting a non-toxic coating like Vaseline, Bag Balm, or baby oil on his feet before walks. After walks on salty roads or sidewalks, do him a favor by washing his feet off. Keep the hair around his toes trimmed, along with his nails, and check for signs of pain or ice and snow buildup.

If you really want to get fancy, you can invest in some fleece or Gortex dog shoes. And don't worry about Spot's pride or your own - sled dogs, as close to wolves as dogs get, wear booties, too. Anne Margolis is the Assistant Editor of Northern Woodlands Magazine in Corinth. The illustration for this article was provided by Adelaide Tyrol. Support for this series is provided by the Upper Valley Community Foundation's Wellborn Ecology Fund: wef@nhcf.org